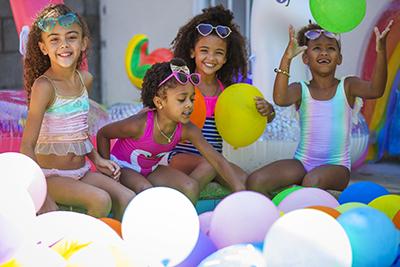 Have the kids wait in a designated space (in or out of the water) and toss water balloons for them to catch. After throwing a couple, tell them that they don’t get anymore unless they sing a song (can be anything, such as “Twinkle, Twinkle Little Star,” “Row, Row, Row Your Boat” or “Humpty Dumpty.”) Every time they sing a song, throw in a few more balloons and try a different song, or make them say something like: “I love swimming!” or “Happy birthday!” Keep doing this until you are out of balloons.

Form two groups: one for the cannonballs, and the other a team of judges. The cannonball group lines up behind a diving board and has to make the biggest splash to get the highest vote. The judges are the voters and give each person a vote between one and 10. An adult is needed to decide what the majority of the judges want to give each person.

Everyone walks clockwise around the swimming pool without stopping. One person is in the water with a hose, which is turned on. Everyone sings, “London river’s flooding up, flooding up …” as everyone else walks whenever “flooding up” is sung; the person in the water can then move the hose out of the water and spray someone else. During the part in the song that says “Take the key and lock her up,” you hold the hose out to another person; this person holds the hose and jumps into the pool.

This game is played in the shallow end of a swimming pool. You need at least five people – two seahorses, two mermaids and one caller – but the more people you have, the better.
The seahorses make a circle in the water, and the mermaids stand behind the seahorses. The caller calls out “mermaids” or “seahorses.” If the caller says “mermaids,” the mermaids must swim like a mermaid with their legs together, clockwise around the circle, and take their place behind the seahorse. The last mermaid in her place is out, and so is her partner. If the caller says “seahorses,” the seahorse must back out between the mermaid’s fluke (legs) underwater. The seahorse must them swim clockwise around the circle, back under the fluke and stand up. The last seahorse in her place is out, and her partner is out, too. The last couple standing is the winner. 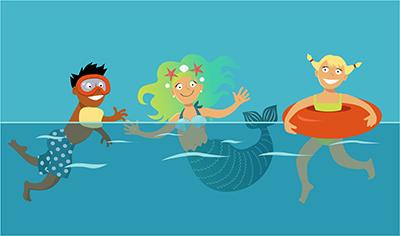 This is a relay race that needs two teams with an equal amount of players. You also need enough water balloons so there’s one for each player (plus a few extras for mistakes). Make start and finish lines about 20 feet apart. Place the water balloons in two piles at the starting line. Call out “go,” and the first person on each team picks up their balloon and runs to the finish line. There, they must sit on their balloon and pop it, and then run back to the start line. Then the next player grabs their balloon and does the same thing. If a player drops their balloon or pops it on the way, they must go back to the start line, take a new balloon and start again. The first team to finish popping all its balloons is the winning team.

Played preferably in a smaller pool, it’s just like regular frozen tag but, once tagged, another player has to swim under your legs to free you.

Throw a large amount of pennies (depending on the number of kids) into a good-size pool. Cover about a third of the pennies with correction fluid, and then send the children in to dive for them. If a child finds a penny covered with correction fluid, that child gets a prize. Great for all ages! Shallow water for the younger kids, and deeper for the older kids.

Have the kids line up beside a length of a pool (25 meters is ideal). One by one, they have to start at one end and swim as far as they can underwater – until they have to come up for air. Once they surface, have them sit on the pool deck next to the place where they came up. The top five or 10 people who went the farthest get a prize.